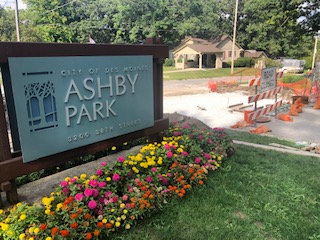 Work has begun to slow traffic on 38th Street between Adams Avenue and Douglas.  38th Street is currently closed near Ashby Park as work crews have removed part of the pavement to install a "speed table", which the city traffic department says is longer than a speed hump and has a flat top.  The work currently is directly adjacent to Ashby Park where Davisson Road intersects with 38th Street.

The speed table will include a raised crosswalk for pedestrians walking to the park.

The city council also approved construction of a chicane on another part of 38th Street.  A chicane is a curb extension that narrows the traffic lane and is designed to slow traffic.  The city also will fill in a gap in the sidewalk north of Amick Avenue.

The traffic calming devices came as a result of 38th Street residents who raised concerns about speeding vehicles on the two big hills on 38th Street between Adams and Douglas.  The location of Ashby Park and several sidewalk gaps along 38th Street prompted the Beaverdale Neighborhood Association to endorse the traffic changes.  The Des Moines City Council approved the project earlier this year.

The work on 38th Street is part of a larger $475,000 project to install traffic calming devices in seven locations around the city.  The 38th Streeet project is the only one in Beaverdale.