A good crowd turned out November 9th for the fall quarterly meeting of the Beaverdale Neighborhood Association at the Northwest Community Center. 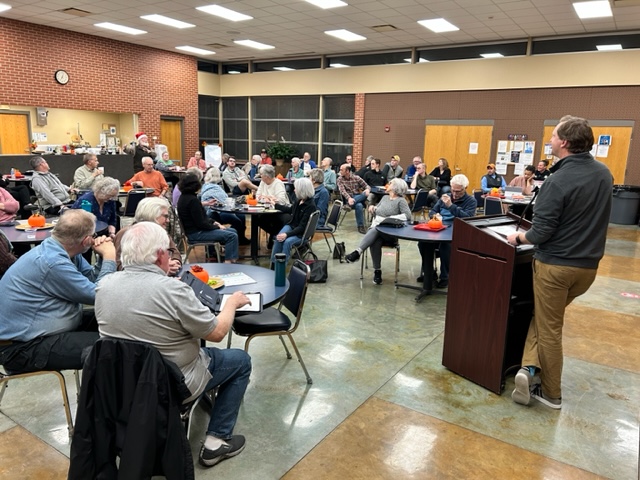 BNA board president Marcus Coenen opened the meeting thanking those who worked on the successful Fall Festival and Booverdale Halloween events.  He said Holiday Happenings is scheduled for December 3rd in the business district.  He also said the old Northwest Hospital is being torn down at the corner of 48th and Franklin, ridding the neighborhood of an eyesore.  The lot will be seeded this fall so grass grows next spring, although it's expected the lot will be developed in the future.  Coenen said plans are moving forward to remodel Beaverdale Park at 34th and Adams.  He said the price tag will be an estimated $2 million and that fundraising has begun.  Donations can be made online at Friends of Des Moines Parks.

Beautification Committee chair Nancy Dunbar said her volunteers had a good year planting flowers and cleaning up common areas.  She said she and another volunteer walk the Urbandale Avenue median at least every two weeks to pick up debris.  Dunbar said the every-other-year Garden Walk is being planned for 2023.  Three gardens are signed up and she would like to get four more to be part of the tour.

Sasha Kamper from the Publc Affairs Committee said there will be an InvestDSM fair next February where residents can talk to contractors.  She welcomed input for topics to cover at future quarterly meetings.

Jean Swenson, a member of the Fall Festival board, reminded everyone that Fall Festival is a separate organization from BNA.  She said Fall Festival is partnering with a woman who runs a program offering free pie at Thanksgiving.  Anyone who wants a free pie can get one with no questions asked.  You can also sign up to donate a pie or to deliver pies on Thanksgiving morning.  More information at Eat Free Pie DSM.

Des Moines police officer Trudy Paulson said crime statistics are still hard to come by because the department is merging computer systems that track crime.  Although details aren't available, she reported the following crimes in Beaverdale for the months of September and October: Four burglaries, two assaults, three vehicle thefts, no robberies, and 7 thefts. 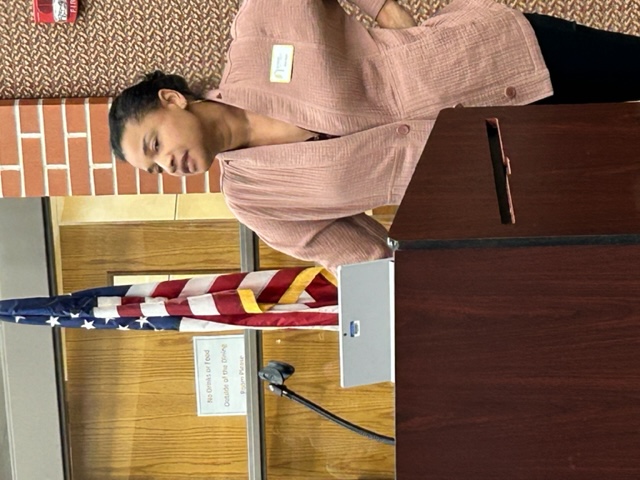 Franklin Avenue Library Manager Nikki Hayter informed attendees about a number of things happening at the library.  Hayter said patrons can read digital copies of the New York Times, Des Moines Register, Consumer Reports and other publications for free with a library card.  Most in the crowd raised hands showing they have a library card and Hayter urged them to try downloading digital books for free using the Libby system.  She said the library recently added a drive-up pickup window on the southside of the building that's open during all library hours.  In response to a question, she explained the new "Library of Things" where patrons can check out kitchen items, tools, outdoor equipment, various technology tools and other items.  Hayter also said library items can be delivered to homebound residents. 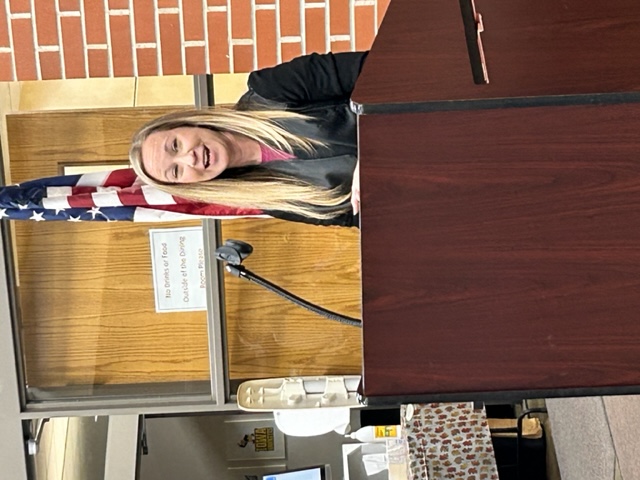 The next presenter was InvestDSM director Amber Lynch, who talked about the four service areas that help residents fix up their homes.  One of the four service areas is in part of Beaverdale - bounded by Hickman Road, University Avenue, 48th Street and Beaver Avenue/41st Street on the east.  Lynch said the city has already down several hundred projects in the Franklin neighborhood. The city of Des Moines has a separate Block Challenge Grant serving the entire city.  More information at InvestDSM.

At the end of the meeting, at-large city councilman Carl Voss took the podium to say he's been getting complaints from residents about speeding.  He said the city has done a number of things to control speeding, like the new speed humps on 38th Street between Adams and Douglas.  Voss then showed the crowd four new yard signs he's had made, with creative input from the wits at Raygun.  At the end of the meeting, folks snapped the signs right up.  See photos below. 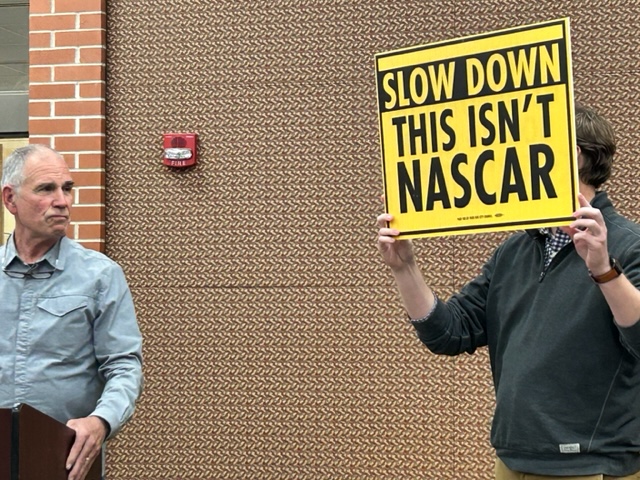 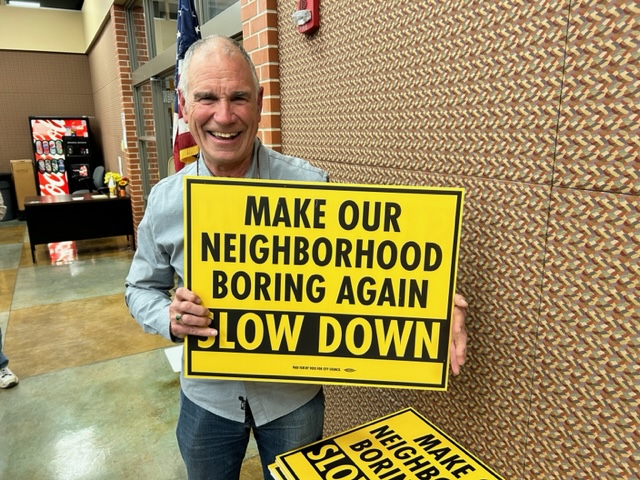 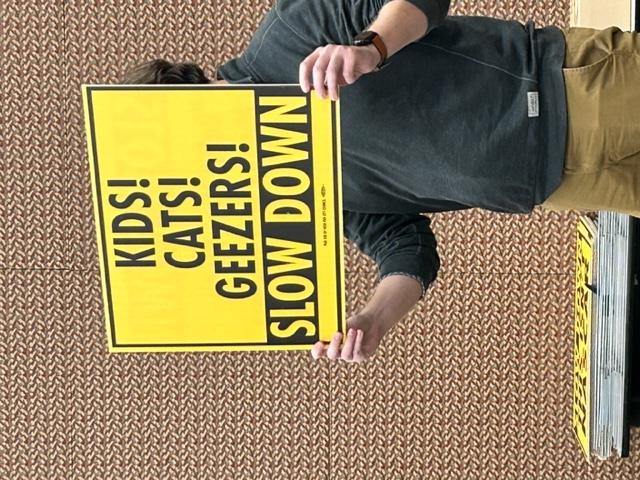 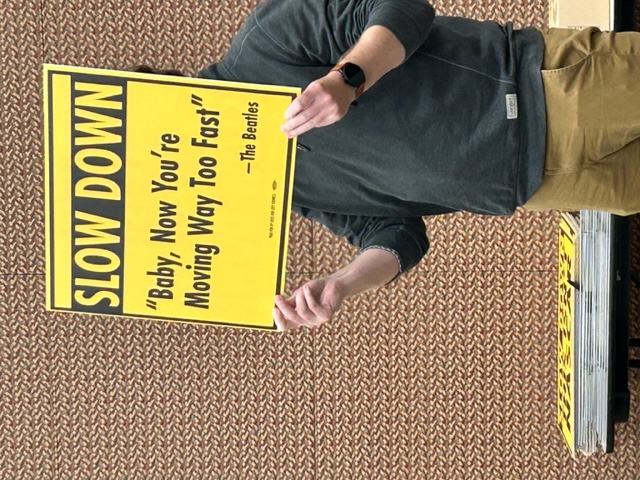